While we were in Florida earlier this summer, we went to a seafood restaurant and ordered some (super expensive) crab legs. And when we got home, we couldn't stop thinking about them...so we decided to boil some ourselves for our fifth anniversary.

Snow crab legs may be more expensive than your usual dinnertime fare, but we were actually pretty impressed by the price; we bought a whole bag for $10. New potatoes and corn are about as cheap as it comes, so all in all, we spent less on this fancy dinner than we might going out for fast food.

Because it was our fifth anniversary, we also sprung for a fancy dessert: cupcakes made by the same lady who made our original wedding cake! 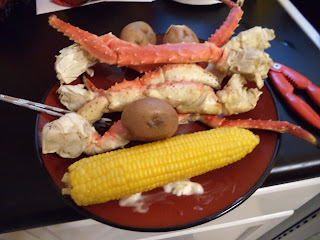 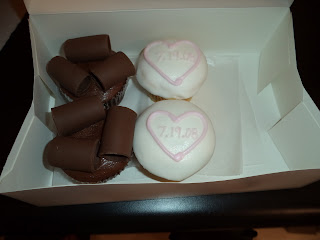 Here's another "not-so-fishy" fish recipe that has become a favorite around here. [Here's another.] This one has been a hit from Day One. And, it's so quick... perfect for a week night. 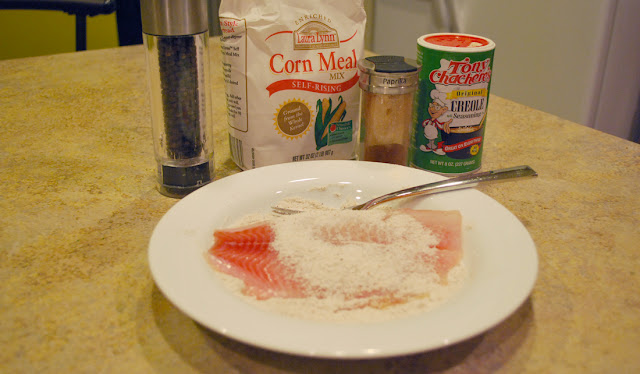 Time: 10 minutes prep, 15 minutes on the stove
Servings: 2, or more with additional filets

Ingredients:
Directions:
Mix the cornmeal and spices in a shallow bowl. Dredge each filet, making sure that each side is covered well.

Heat oil in pan. Cook filets in oil until golden brown... about 3-4 minutes on each side.

Top with a dollop of salsa, and serve. 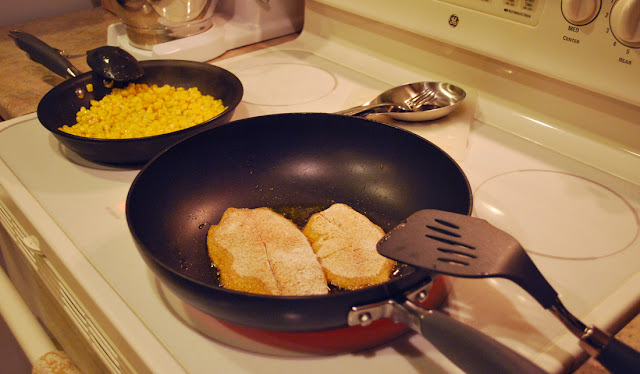 Tonight we paired it with fire-roasted corn and "spicy" beans... I had planned to use black beans, but we were out, and I had to make do with pintos. 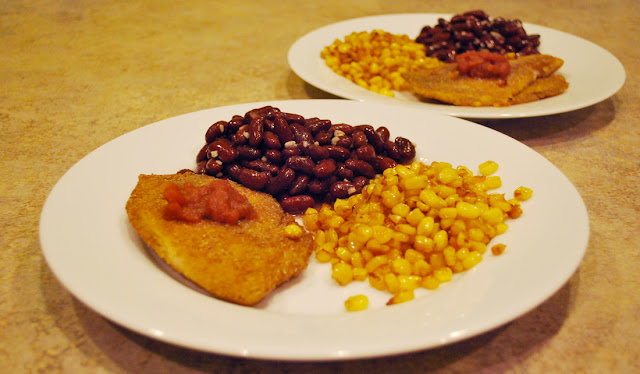 Email ThisBlogThis!Share to TwitterShare to FacebookShare to Pinterest
Labels: fish

When I was a kid, my mom saw this Turkey & Cranberry Ring recipe at a Pampered Chef party and adapted it to her picky eaters... aka no mayo, mustard, cranberries, or cheese.

Inspired by the combination of refrigerated crescents and deli turkey, I have put together my own combo that allows picky eaters to thrive... each crescent can be made to order.

Also, I recently had an aha! moment that makes this meal even more efficient... Rob loves fancy Muenster cheese, but he could never finish eating the whole package before it became a science project in the fridge. Solution: stop by the deli and ask them to slice just 3 or 4 slices of the gourmet stuff. I pay about $1.50 for the quarter-pound, and there's not enough left over to spoil and waste. 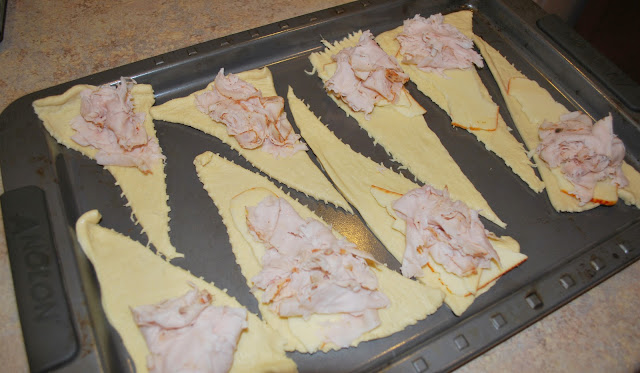 Turkey Crescent Rolls
Time: 10 minutes prep, 12-15 in the oven
Serves: 2... I serve myself 3 rolls, while Rob gets 5
Ingredients:
Directions:
Unroll crescent roll dough. Place a triangular slice of cheese (if you're into that sort of thing), a handful of shaved deli meat, and any other toppings of the widest part of the dough.

Roll up the triangle as you would regular crescent rolls, making sure that the filling stays tucked inside.

Bake in the oven as directed on the package... maybe a minute or two more to prevent the dough from being uncooked in the middle. 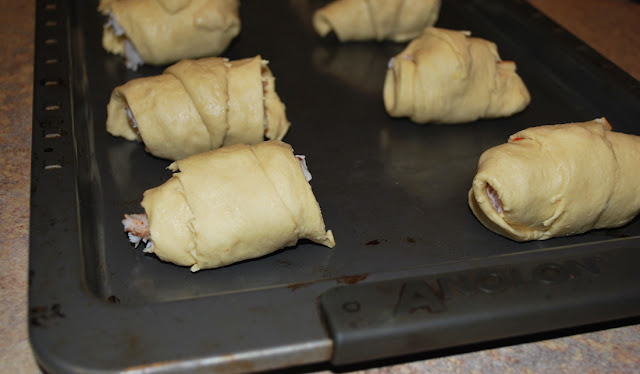 As you can see, tonight I paired the turkey crescent rolls with lima beans and baked sweet potato fries. Yum!! 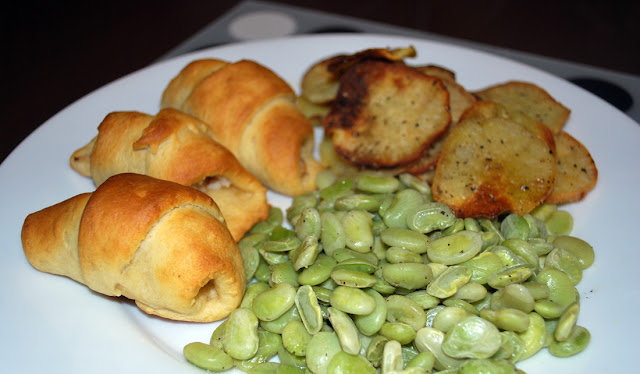 Email ThisBlogThis!Share to TwitterShare to FacebookShare to Pinterest
Labels: turkey

Inspired by Callie's post about pesto chicken last week, my meal plan this week went something like this... 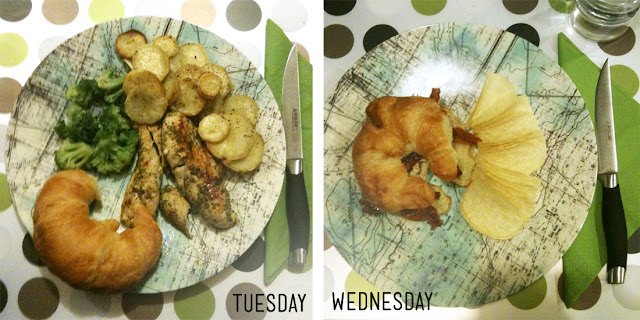 Email ThisBlogThis!Share to TwitterShare to FacebookShare to Pinterest
Labels: chicken

After a long day at work, sometimes I just want some yummy Mexican food. Who am I kidding... I could go for Mexican food any time.

And, although Rob and I have recently found our favorite Mexican restaurant in this "new" town of ours, we can't justify the cost or calories of going too often. 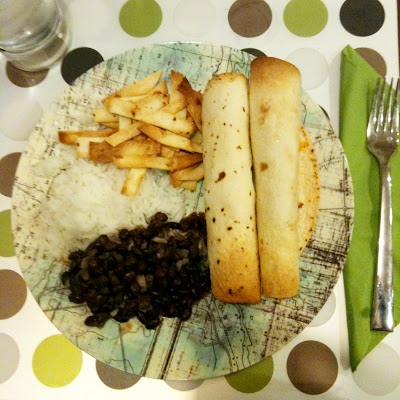 Chicken Flautas
Time: 10 minutes prep. 15 minutes cooking.
Servings: 2 or more, depending on how many you make

Bake on a cookie sheet at 400 degrees Fahrenheit for about 15 minutes.
Posted by JJB at 8:45 PM 1 comments

Red Potato Soup (aka I used the crock pot!)

Looking for recipes on the Internet can be overwhelming. And I have noticed that I tend to default to the recipes with the fewest number of ingredients. I reject outright any recipes that list out 15 different herbs and spices...even if I have all of them on hand! I really wish recipes would triage their ingredients a bit better and tell you which ones are absolutely essential and which ones you really don't need. Maybe I'll start a trend...

Over the holidays, one of my youth parents told me that she once cooked an entire Thanksgiving dinner using only crock pot recipes. I found that inspiring, because the crock pot has always seemed a little bit daunting (even though every working person alive assures me it's the easiest way to cook!) So, since we still don't have an oven, I thought I'd give it a go. And since we had a bunch of red potatoes leftover from last week, I decided to make potato soup. I searched until I found a recipe written at a beginner level, with a short ingredient list and pictures.

I have to report that "everyone else" was right. Using the crock pot was extremely easy...and that's coming from someone who once burned a frozen dinner! Jordan took a bite, and made a face that I'd never seen before. "What's wrong?" I asked.

"This is the best thing you've ever cooked!" he said.

I know that might not be saying much...or maybe it's saying a WHOLE LOT!!

You definitely need these ingredients: 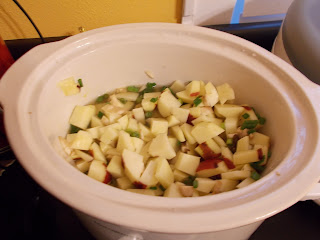 In the morning:
Wash and skin the red potatoes...but don't be too militant about it. The skins add texture, flavor, and nutrients, so leave some on. Cut the potatoes into small cubes, and place in crock pot. Add chicken broth, green onions, and salt and pepper. If you want to add any other vegetables, you can do that too (I added a few chopped mushrooms). Cook on low for 8 hours.

In the evening:
Don't freak out when you look at your mixture and it doesn't look like soup yet. It will! Mash it up to your desired level of lumpiness using a potato masher, or if you don't have one, a spoon. (Guess which one I used?? :)) Add the half and half. Cook on high for 20 minutes. Garnish as desired (we added green onions and cheese, and served with crusty bread). Eat and enjoy! 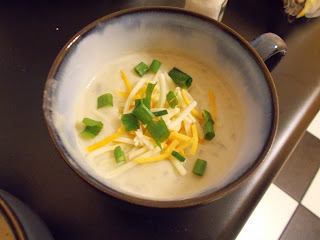 Email ThisBlogThis!Share to TwitterShare to FacebookShare to Pinterest
Labels: potatoes

Four days before the end of the year, we bought a house: 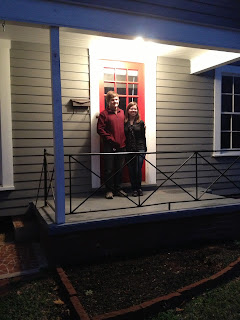 As a result, all of my New Year's resolutions revolved around cultivating my domestic skills:


I have not posted on this blog since the Great Avocado Disaster of 2011, instead retreating back into the world of mac-and-cheese, frozen dinners, and fast food.

So here I go again.

One thing should be noted: we haven't bought an oven yet. So my appliance options are limited to the microwave, George Foreman grill, dehydrator, and crock pot. Strangely enough, this is actually helping me to narrow down my recipe choices!

Last week, I made grilled pesto chicken. On Monday night, I grilled the whole package; we ate two servings with couscous and a green salad, and I shredded the rest for later in the week. I used the leftovers to make paninis and grilled potatoes (our favorite meal of the week: Tuesday night!) and salad (Friday night!). Super easy, and super versatile!

(I know most of you can figure out these recipes without having them written out....but I'm including all the steps in an effort to help out any other newbies who might stumble upon this post!) 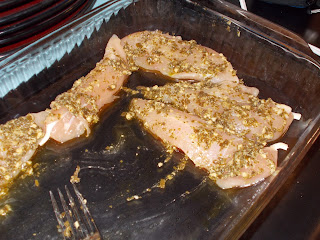 You will need:
Rub pesto sauce on the chicken breasts. Marinate in the fridge for 2 hours. Afterward, put the chicken on the George Foreman grill, and cook for about 7 minutes. Cut into the chicken to make sure it is done.

You will need:
Microwave the water for two and a half minutes. Pour the instant couscous in, and stir. Cover and let sit for 5 minutes. Fluff and serve! 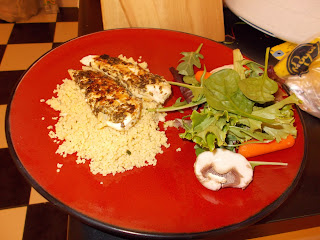 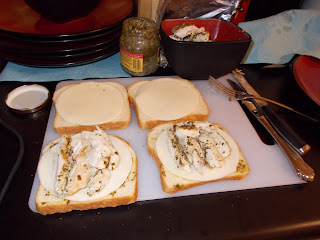 You will need:
Spread pesto on the bread, and assemble the sandwiches. Cook on the George Foreman grill for about 4 minutes, or until cheese is melted. 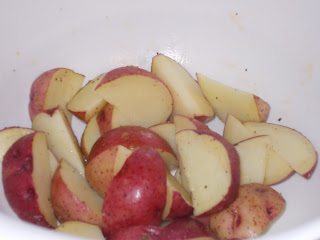 You will need:
Cut potatoes into wedges (about 8 wedges per potato), and put them in a microwave-safe bowl. Toss them with the butter, and season them with salt & pepper. Microwave on high for 3-4 minutes. Then put them on the George Foreman grill for about 5 minutes, or until they "look done." (I did not get this exactly right...they were a little undercooked. But I like potatoes in all forms, so it didn't bother me!) 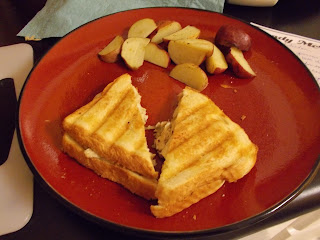 Two sisters, living 769 miles away, share their adventures in cooking... one ingredient at a time.